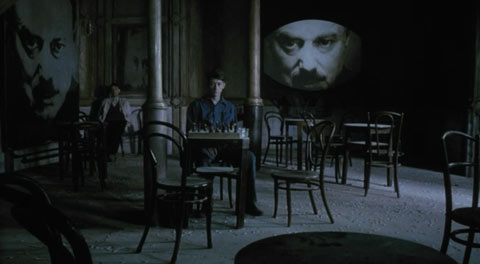 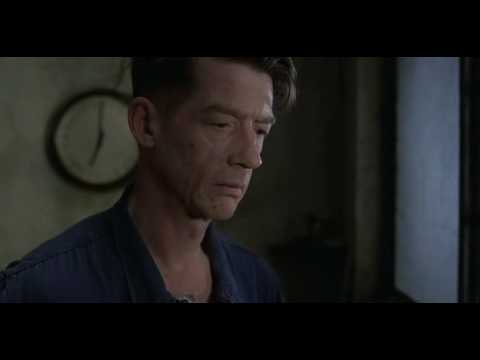 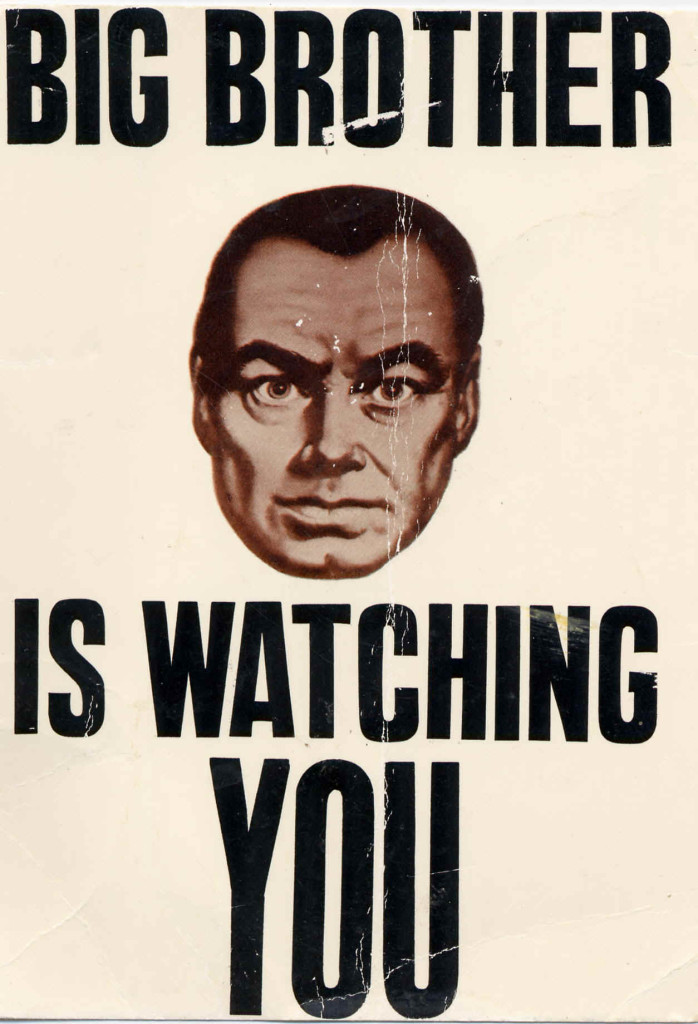 L’Essere e il Reale , pag. 249
You believe that reality is something objective, external, existing in its own right. You also believe that the nature of reality is self-evident. When you delude yourself into thinking that you see something, you assume that everyone else sees the same thing as you. But I tell you, Winston, that reality is not external. Reality exists in the human mind, and nowhere else. Not in the individual mind, which can make mistakes, and in any case soon perishes: only in the mind of the Party, which is collective and immortal. Whatever the Party holds to be the truth, is truth. It is impossible to see reality except by looking through the eyes of the Party. That is the fact that you have got to relearn, Winston. It needs an act of self- destruction, an effort of the will. You must humble yourself before you can become sane.’
(Qui O’Brien spiega a Smith che esiste solo la realtà imposta dal partito). 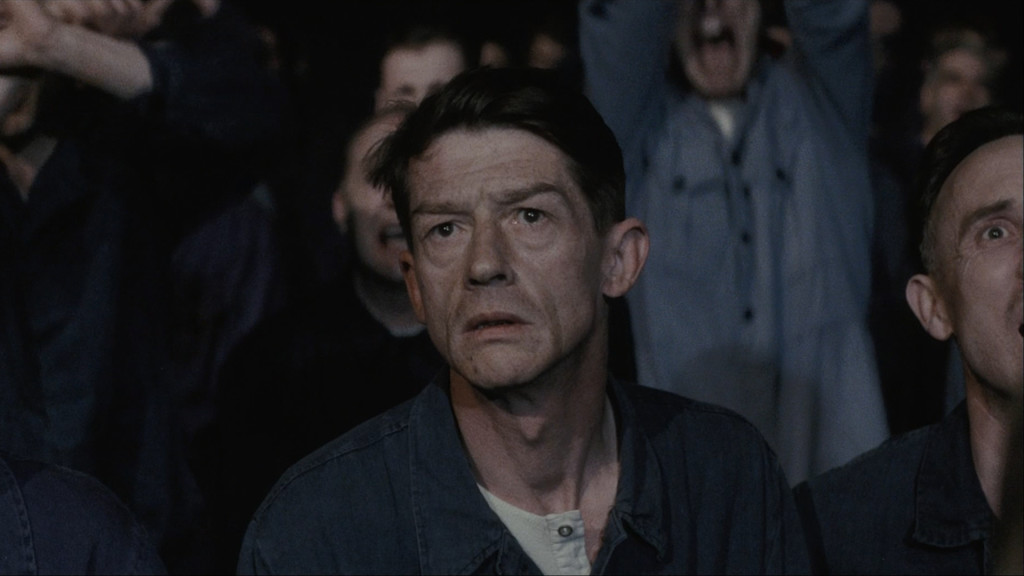 Tragedia e Sentimento , Pag. 30
Tragedy, he perceived, belonged to the ancient time, to a time when there was still privacy, love,and friendship, and when the members of a family stood by one another without needing to know the reason. His mother’s memory tore at his heart because she had died loving him, when he was too young and selfish to love her in return, and because somehow, he did not remember how, she had sacrificed herself to a conception of loyalty that was private and unalterable. Such things, he saw, could not happen today. Today there were fear, hatred, and pain, but no dignity of emotion, no deep or complex sorrows.
(Secondo l’Ingsoc, nella società totalitaria non devono esserci i sentimenti, che non possono essere controllati e/o controllabili dal partito). 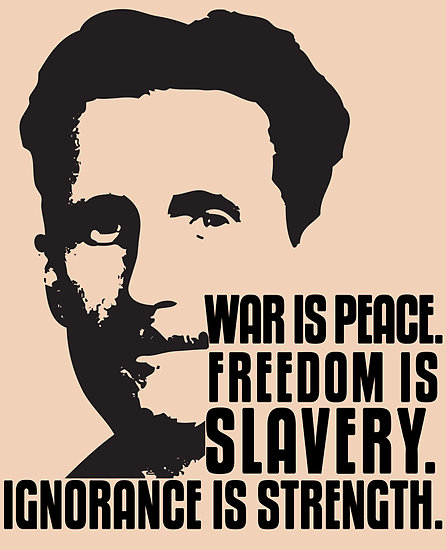 I Ministeri,  pag. 43
There was a whole chain of separate departments dealing with proletarian literature, music, drama, and entertainment generally. Here were produced rubbishy newspapers containing almost nothing except sport, crime and astrology, sensational five-cent novelettes, films oozing with sex, and sentimental songs which were composed entirely by mechanical means on a special kind of kaleidoscope known as a versificator. There was even a whole sub-section — Pornosec, it was called in Newspeak — engaged in producing the lowest kind of pornography, which was sent out in sealed packets and which no Party member, other than those who worked on it, was permitted to look at.
(Qui è illustrate l’organizzazione dello Stato del Grande Fratello). 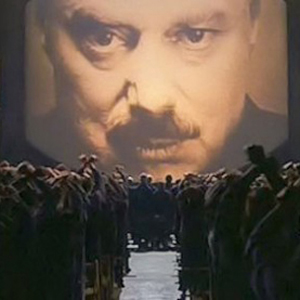 Le Purghe,  pagg.  44-45
The great purges involving thousands of people, with public trials of traitors and thought-criminals who made abject confession of their crimes and were afterwards executed, were special show-pieces not occurring oftener than once in a couple of years. More commonly, people who had incurred the displeasure of the Party simply disappeared and were never heard of again. One never had the smallest clue as to what had happened to them. In some cases they might not even be dead. Perhaps thirty people personally known to Winston, not counting his parents, had disappeared at one time or another. Winston stroked his nose gently with a paper-clip.
(La soppressione degli oppositori del Grande Fratello, reali, ma soprattutto presunti).

La Neo-Lingua, pag. 51
Take “good”, for instance. If you have a word like “good”, what need is there for a word like “bad”? “Ungood” will do just as well — better, because it’s an exact opposite, which the other is not. Or again, if you want a stronger version of “good”, what sense is there in having a whole string of vague useless words like “excellent” and “splendid” and all the rest of them? “Plusgood” covers the meaning, or ” doubleplusgood” if you want something stronger still.
(La nuova lingua del Grande Fratello) . 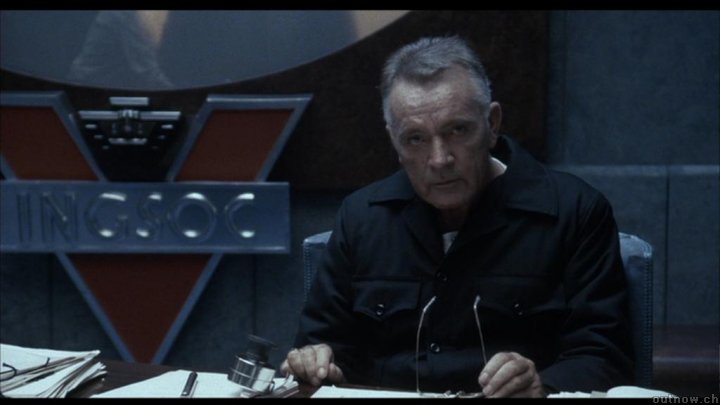 Proletari, o schiavi ?  pag. 52
‘The proles are not human beings,’ he said carelessly. ‘ By 2050 earlier, probably — all real knowledge of Oldspeak will have disappeared. The whole literature of the past will have been destroyed. Chaucer, Shakespeare, Milton, Byron — they’ll exist only in Newspeak versions, not merely changed into something different, but actually changed into something contradictory of what they used to be. Even the literature of the Party will change. Even the slogans will change. How could you have a slogan like “freedom is slavery” when the concept of freedom has been abolished? The whole climate of thought will be different. In fact there will be no thought, as we understand it now. Orthodoxy means not thinking — not needing to think. Orthodoxy is unconsciousness.’
( Secondo l’Ingsoc, I proletari non sono persone, ma schiavi). 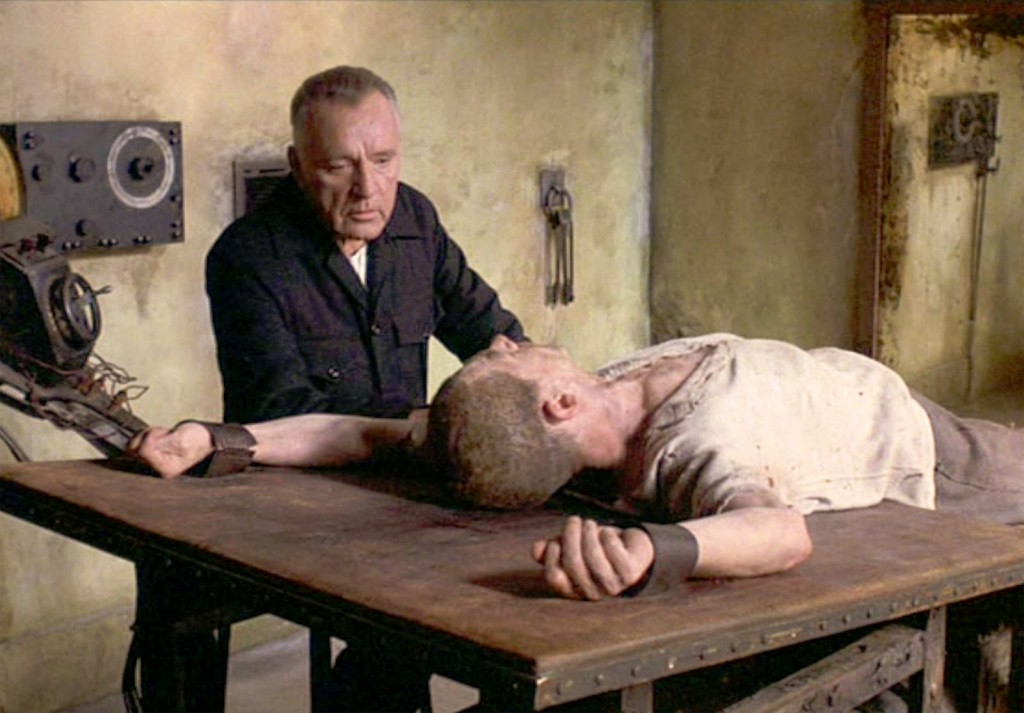 Propaganda, cioé da propagare, pag. 58
It appeared that there had even been demonstrations to thank Big Brother for raising the chocolate ration to twenty grammes a week. And only yesterday, he reflected, it had been announced that the ration was to be reduced to twenty grammes a week. Was it possible that they could swallow that, after only twenty-four hours? Yes, they swallowed it. Parsons swallowed it easily, with the stupidity of an animal. The eyeless creature at the other table swallowed it fanatically, passionately, with a furious desire to track down, denounce, and vaporize anyone who should suggest that last week the ration had been thirty grammes.(Nello stato del Grande Fratello, l’aumento dei prezzi viene presentato come una diminuzione di …un aumento!). 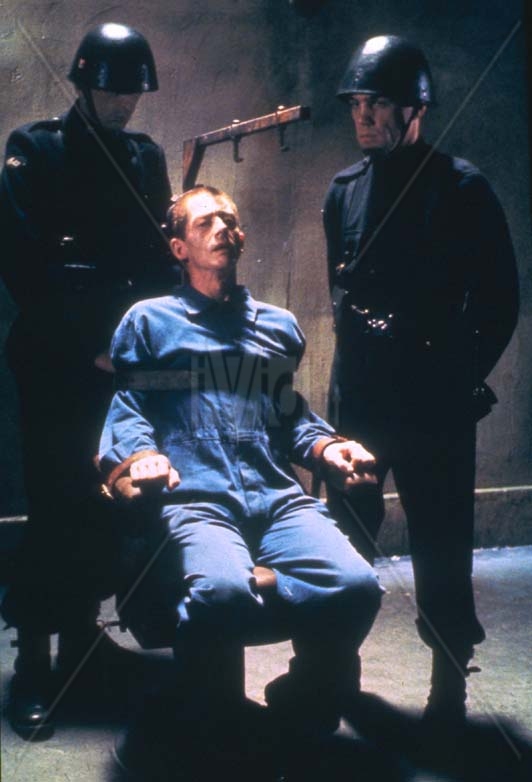 Contro l’amore, pagg. 65-66
The aim of the Party was not merely to prevent men and women from forming loyalties which it might not be able to control. Its real, undeclared purpose was to remove all pleasure from the sexual act. Not love so much as eroticism was the enemy, inside marriage as well as outside it. All marriages between Party members had to be approved by a committee appointed for the purpose, and — though the principle was never clearly stated — permission was always refused if the couple concerned gave the impression of being physically attracted to one another. The only recognized purpose of marriage was to beget children for the service of the Party. Sexual intercourse was to be looked on as a slightly disgusting minor operation, like having an enema. This again was never put into plain words, but in an indirect way it was rubbed into every Party member from childhood onwards. There were even organizations such as the Junior Anti-Sex League, which advocated complete celibacy for both sexes. All children were to be begotten by artificial insemination (artsem, it was called in Newspeak) and brought up in public institutions. This, Winston was aware, was not meant altogether seriously, but somehow it fitted in with the general ideology of the Party. The Party was trying to kill the sex instinct, or, if it could not be killed, then to distort it and dirty it. He did not know why this was so, but it seemed natural that it should be so. And as far as the women were concerned, the Party’s efforts were largely successful.
(Il Grande Fratello non vuole legami stabili tra uomo e donna, perché i legami affettivi non sono controllabili. Succede qualcosa di simile nel mondo occidentale del 2015!). 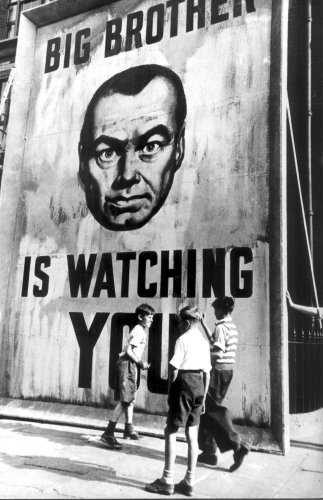 Il controllo sulle masse, pag. 69
The Party could not be overthrown from within. Its enemies, if it had any enemies, had no way of coming together or even of identifying one another. Even if the legendary Brotherhood existed, as just possibly it might, it was inconceivable that its members could ever assemble in larger numbers than twos and threes. Rebellion meant a look in the eyes, an inflexion of the voice, at the most, an occasional whispered word. But the proles, if only they could somehow become conscious of their own strength. would have no need to conspire. They needed only to rise up and shake themselves like a horse shaking off flies. If they chose they could blow the Party to pieces tomorrow morning.
(Il Grande Fratello ha il controllo su tutto, per cui se dissenti, sei un nemico del …popolo!). 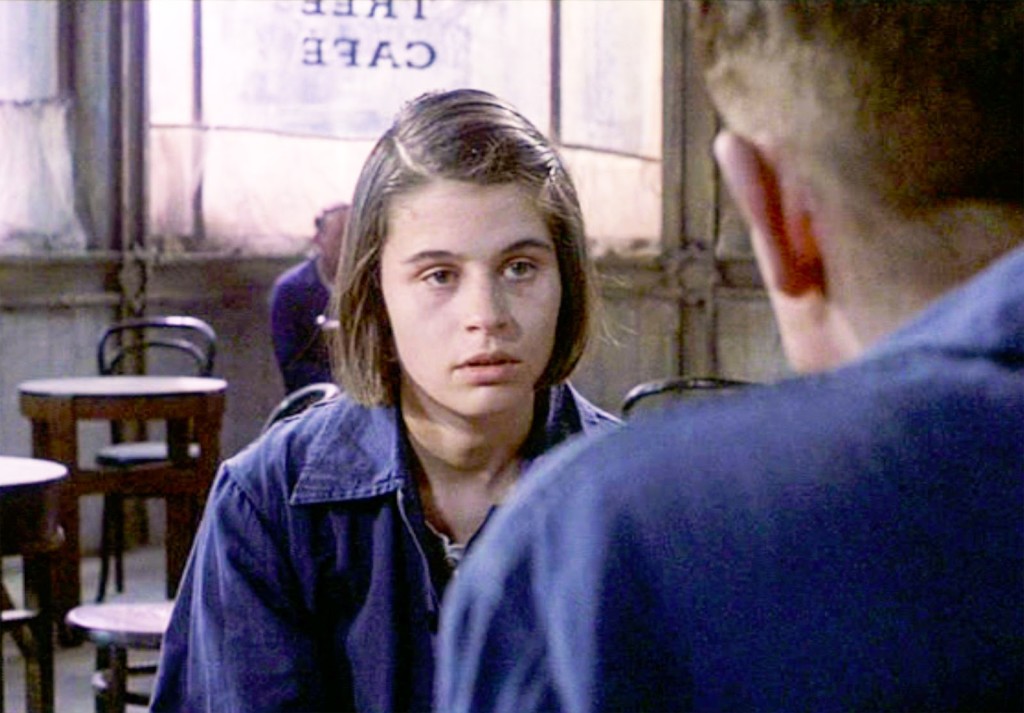 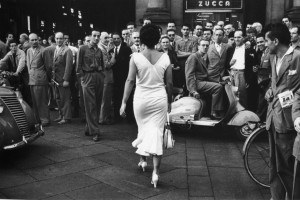